As of now, Siemens has released Femap version 12.0.  This follows the latest subrelease of v11.4.2 in 12/2017 and major release of v11 in 1/2013.  You can find my standard spiel accompanying each new release post here: my recommended upgrade process.  That page has links to the appropriate Siemens PLM Software download website, along with some tips and tricks for carrying over your preferences and program setup from the old version.

So what can you expect?

Femap v12.0 will have compatibility with NX Nastran version 12 (numbering coincidence).  Version 12 has solution sequences 401/402, which bring additional nonlinear capabilities to the solver.  SOL401 is a new code developed by Siemens.  It is a “multistep”, structural solution which supports a combination of static (linear or nonlinear) subcases and modal (real eigenvalue) subcases.  It is what Siemens considers their “multiphysics” solution for coupled effects.  SOL402 is the Siemens implementation of the Samcef solver, a code they recently acquired.

You can also now elect to participate in the Product Excellence Program.  This will enable users to have improved experiences with Femap as bugs are reported. 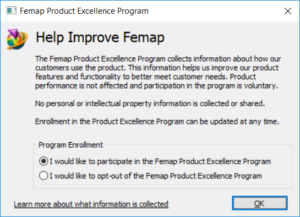